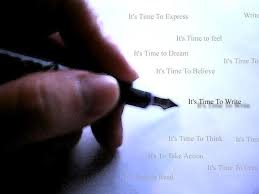 This one’s dedicated to the older crowd who aren’t quite sure they’re meant to be a writer, despite the deep down sense that urges them to touch pen to page. Doubt is a bastard of a beast that silently creeps in and builds its nest in your confidence and only rears its ugly head when you look at your writing and whispers, “You aren’t where you should be for someone your age. Maybe you’re just not good at it because a great writer–hell, even a competent one–would be further along by now, don’t you think?“

This couldn’t be further from the truth.

Writing doesn’t come with a sell by date and it doesn’t give a damn how long in the tooth you are. Don’t believe me? Do your research. In your info gathering you’ll no doubt discover that Laura Ingalls Wilder was 60 when she first published her “Little House” series, Raymond Chandler sold his first pulp crime short story at 45, Richard Adams was 50 when “Watership Down” went to press, and that’s just the tip of the iceberg. So, the question I put to you is, if they can do it, why can’t you as well?

The mere fact that you’re questioning yourself and your abilities probably means you’re meant to be a writer. And who knows, maybe the words you write will help change the world in some small way or impact the lives of your audience. And even if that isn’t the case, should you feel that something is missing and recognize that the world, in spite of its diversity and splendor, simply is not enough and that your dreams are so much bigger than the reality that surrounds you… why not write about it?

If the yearning is gnawing at your sanity, the onus is on you to hang your self-doubt on the coat rack (don’t worry, you can pick it up on your way out), stuff your excuses in an old cigar box, give perfectionism the night off, mine your soul for inspiration and when you hit a gold vein, start writing. And embrace what comes out. If it’s messy, let it be messy, or chaotic, or terrifying, just turn the editor off and keep moving forward. You’ll have plenty of time to edit your piece after you’ve finished writing it.

One last thing before I sign off, whenever I got myself into trouble and grounded as a kid, my mother used to say, “You’re where you are, because of who you are” and maybe that applies to you when it comes to writing. Perhaps you’re meant to be the age you are at this very moment, filled with your own unique life experiences, to start writing that project that’s been pestering you for so long.

So, push the ages of the recent crop of bestselling authors out of your mind and follow your calling. Comparing the fruits of their labor to your current lack of same is ridiculous (and frankly, their success is none of your business). All you can do is your best, so get to writing, will ya?

I wish you nothing but the very best of luck in completing your piece (and enjoy the process while you’re at it).

Sally forth and be agelessly writeful.