Hi, my name is Rhyan and I’m a movie addict.

Native New Yorker, born in Manhattan, raised in The Bronx, and because I inherited my mother’s transient nature, I’ve managed to live in each of the five boroughs. Poor as a skunk’s misery, a church mouse, Job, Lazarus, and dirt. Hell, I’m still poor, and most likely always will be.

The best thing about growing up without anything is that you learn to make the most of what you’ve got, and distract yourself from what you haven’t got. My major distraction was television.

It was my babysitter, my tutor, and my secret friend that entertained me as the rest of the world slept. Its siren call would lure me into the living room, where I’d toss my blanket over the both of us so the light didn’t spill out of the room and give away my position. Then I’d plug my mono transistor radio earphone into the headphone jack and marvel at all the noir, horror and science fiction movies that played on CBS’ The Late Show, The Late Late Show, and The Late Late Late Show.

I was always a wreck in school the following day, but man, was it worth it.

The only thing that trumped this near nightly process was the first Saturday of the month. Like most poor folk, we were on welfare and this was before the Food Stamp bill was passed in 1970 which meant everything, rent, bills, and food monies arrived in the mailbox in one convenient check. The Saturday that followed check day was always considered my day. Wherever I wanted to go, wherever I wanted to play.

My playground of choice? 42nd Street. The first stop was Tad’s Steak House. Sure, the broiled steak was thin and more gristle than meat, the garlic bread was oilier than Brylcreem, the chocolate pudding coated with that yucky skin and a fountain Coke served in a large red plastic tumbler that smelled like the previous beverage it held… but to me it was pure heaven.

Then my mother gestured at the movie theaters that lined both sides of the street and said the most perfect thing anyone could have said to me at the time, “You can see all the movies you can stay awake for.”

These were once majestic movie houses that slowly transformed during the decline of New York City starting in the late 50’s into grindhouse theaters before grindhouse was even a word. Each one ran three films, usually one current and the others whatever was on hand.

On these magic Saturdays, I tore through Roger Corman flicks, Hammer Films, the Toho tokusatsu imports and so much more. All uninterrupted viewing aside from the occasional mom hand that would clamp over my eyes during nude or sex scenes. Only when I started to nod off was it time to head home, despite my protestations. 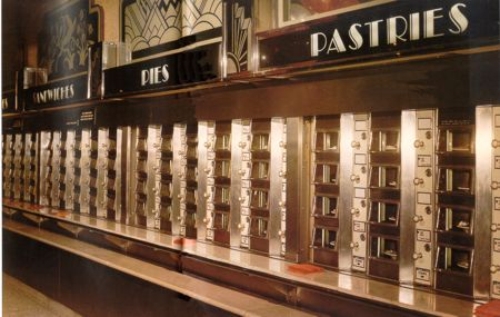 On the way home, we’d stop off at the Horn & Hardart automat and my mother would dump tokens into my hand and send me off to fetch dinner from the individual glass door compartments. Even though it was only plain food — sandwiches, beef stew, and the like — there was something about slotting coins and retrieving a prize that appealed to me.

The final detour before reaching home was the Optimo Cigars shop that had a spinning wire rack of comic books where I’d select my month’s reading material.

I realize this may not seem like any great shakes to you, but it remains the only positive memory I have of my mother — too long and too personal a story to go into here — and I can’t think of a better way to honor the anniversary of her passing.

Sally forth and be playground exploringly writeful.