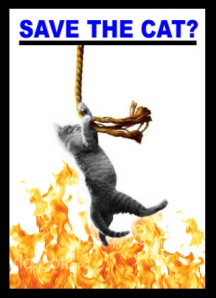 “There’s this inherent screenplay structure that everyone seems to be stuck on, this three-act thing. It doesn’t really interest me. To me, it’s kind of like saying, ‘Well, when you do a painting, you always need to have sky here, the person here and the ground here.’ Well, you don’t.” — Charlie Kaufman

“Oyez, Oyez, Oyez!” That’s the town crier outside your window, all decked out in a red and gold robe, white breeches, black boots and a tricorne hat, clanging his handbell and making the public pronouncement that “Hollywood is broken!”

A statement which isn’t close to being accurate. Even if the industry fails to rake in the desired opening weekend profits from their current crop of mega-budget box office bombs, it will continue to churn out content even if it has to scale back production costs and cut salaries to do so. The real problem with Hollywood lies within its mindset, the outdated mode of thinking it still employs.

The simple fact is what used to work a few years ago no longer does and unless you’re Amish, a hermit, a bunkered-in end-of-the-world survivalist, or possess a serious dislike for 24-frame-per-second entertainment, you’ll have noticed a decline of late in the quality of Hollywood movies. And you’re not alone. Not only has theater attendance been dwindling and the grousing of movie critics and cinema snobs increased regarding the lack of originality springing from the loins of Tinseltown–particularly during this painful remake, reboot and prequel/sequel franchise phase—but even the average LCD movie-goer has begun to experience a touch of ennui in the midst of all the fast-paced, mind-baffling CGI and excessive explosions.

No big news if you’re a screenwriter, aspiring or otherwise, as this has been a source of debate and complaint for a couple of years now and it didn’t truly become headline worthy until Steven Spielberg and George Lucas spoke at USC, weighing in on the subject and predicting the inevitable “implosion” in the mega-budget film industry. Which, of course, led to a series of articles speculating, finger-pointing and assigning blame.

The latest target is American screenwriter Blake Snyder, who released a screenwriting manual in 2005, Save the Cat! The Last Book on Screenwriting You’ll Ever Need. His book provided a by-the-minute pattern for screenwriting, which included 15 essential plot points or beats that all scripted stories should contain (the example below is based on a screenplay 110 pages in length ):

1. Opening Image (Pg. 1) – Is a snapshot of the world before this story begins.

2. Theme Stated (Pg. 5) – Where you state what your movie is about before the adventure begins.

3. Set-Up (Pgs. 1-10) – The introduction to the world, the protagonist and the overall problem within the story.

4. Catalyst (Pg. 12) – Often referred to as the inciting incident, this is the point where something happens within your protagonist’s world that sets the story into motion.

5. Debate (Pgs. 12-25) – Though it’s obvious that your protagonist must accept the “call to adventure,” he/she doubts the journey they must take.

6. Break into Two (Pg. 25) – Your protagonist has faced the now-or-never choice and proactively steps into Act 2 where the story begins to ramp up.

7. B Story (Pg. 30) – Usually associated with the “love” story, this is where the protagonist encounters the person to whom they can confide what’s happening. But the role isn’t restricted to a love interest — it can be a Mentor, or a bunch of new characters that will help the protagonist understand this strange new place, assist him/her, and teach them the lesson of the journey.

8. Fun and Games (Pgs. 30-55) – This is where you find your “trailer moments.” The plot gets put on hold as your protagonist explores the new world (essentially it’s your pitch for the movie when it comes time to sell it).

9. Midpoint (Pg. 55) – Is the “no turning back” part of your movie, where your protagonist faces a whole new problem — even bigger than the one they started out with. This is where we get either a “false victory” (high) or a “false defeat” (low). It’s also where “time clocks” appear to pick up the pace of the story and rush to the end.

10. Bad Guys Close In (Pgs. 55-75) – From this point, both internal (problems inside the protagonist’s team) and external (the antagonists tighten their grip) pressure is applied that makes life tough for the hero.

11. All Is Lost (Pg. 75) – Something (an old belief system) or someone (the mentor) dies at this point in the story, forcing the protagonist to change in order to grow into the person they need to be to accomplish their goal(s).

13. Break into Three (Pg. 85) – But thanks to a fresh idea, new inspiration, or last-minute advice or information from that person representing the B Story, the protagonist takes a proactive step into Act 3, devising a brand new plan of action and committing to going all the way!

14. Finale (Pgs. 85-110) – By adding what he’s learned to what he was before, the protagonist applies all that they are in a brand new way. Here is when your hero is at the doorstep of defeat yet “digs deep down” for that last ounce of strength — and faith — to triumph!

15. Final Image (Pg. 110) – Since all stories are about “transformation,” this is reverse of the Opening Image, a “snapshot of the world after,” proves that a change has occurred within the protagonist and their world.

Unfortunately, Mr. Snyder passed away in 2009 and is unable to defend himself, but is his book actually the reason that more and more people are becoming disenchanted with new releases? Screenwriters fall on both sides of this argument. There are those who see Save The Cat as a boon since the book instructs writers on producing unique, hot concepts, requires that they carry out the “promise of the premise” and beseeches them to “escalate the stakes” with full force in a bold new manner. While others think Mr. Snyder’s formula is best suited for high concept family comedies and has no business being applied to adult-themed stories that operate in black/grey moralities, as shoehorning them into the rigid 15 beat structure chokes the life out of the original work.

When it comes to the subject of creating beat sheets, not to sound like a fence-rider, but I find myself being both pro and con. On the plus side, hats off to Mr. Snyder for analyzing the composition of Hollywood films and further segmenting the 3 Act structure into smaller more manageable parts, much in the same way Gustav Freytag did in the nineteenth century with stage plays (see: Climbing The Freytag Pyramid). It really does help you gain a better understanding of the basic anatomy of an average studio-produced movie.

On the negative side, you have what I call the Nostradamus Effect, and if you’ve watched more than a handful of movies in your lifetime, you’ve experienced it to some degree. It occurs whilst viewing a film and suddenly you’re able to predict all the salient plot points, the futures of the supporting characters, and spot each and every twist and turn as if you’ve read them on signposts a mile off. That’s your brain recognizing the pattern, the formula. And I firmly believe that formulas cannot produce art, nor can they possess the spontaneity necessary to shock and surprise the modern day movie audience.

Having said that, I take a “Hey, man, whatever gets you writing” approach to Mr. Snyder’s methods when it applies to other writers. And that’s not to say that I don’t use the Save The Cat formula on occasion, but only when a stubborn story refuses to take shape. Once I get that bad boy locked down, I shake things up accordingly in the rewrite. Rules are meant to be broken, after all, and any writer worth their salt knows this. But guess who doesn’t? Yup, the rest of the industry.

Studios employ script readers who provide coverage–the analysis and grading of screenplays with Pass/Fail marks—which takes the whole beat system a bit too literally about hitting all the 15 marks on exact page counts. And if a script happens to be lucky enough to make it past these literary sentries, it will go through an additional series of rewrites by various screenwriters, adding studio-suggested bits stolen from other popular films “that worked previously”—whether the recycled bits fit the theme of the current script or not–often resulting in a frankenfilm. Sorry, you can’t hang that on Save The Cat.

I can’t tell you the number of early draft screenplays I’ve read that were far and away superior to the finished product. A few recent ones that come to mind are: Jon Spaihts’ “Alien Engineers” (Prometheus), Evan Daugherty’s “Snow White and the Huntsman,” and Kurt Wimmer’s “Edwin A. Salt” (Salt).

In closing I’d like to invite all the doomcasters to stop picking on a dead man whose system is quite possibly the victim of misuse and put their sandwich boards away. Hollywood is getting a much needed wake-up call–thanks in no small part to the internet and other modes of content distribution–and isn’t in danger of imploding, it’s just experiencing some growing pains. The first thing it needs to do, in the process of mitigating its risk in the creation of new product, is to focus a little more on forecasting what will sell tomorrow (#innovation) rather than duplicating what sold yesterday.

Sally forth and be structurally knowledgeable yet rule-breakingly writeful.